To your right you will see panels with more information (in French) on the natural reserves of Tienne d’Aise (north and south).
The region of Lessive boasts several orchid varieties.

The northern part of Tienne d’Aise is covered with a grass carpet with two very distinct features.
Within the dry prairies on a limestone soil, certain species are dominant, while others are poorly represented. Many of them are adapted to the particular conditions of the local environment and totally unable to live elsewhere.
Goats and sheep used to graze freely under the guidance of a shepherd on these poor, rocky, calcareous soils. The apogee of this type of farming - that already existed during the Roman Empire - was in the 19th century. It was progressively abandoned at the end of the 19th century. The long-term interruption in the use of these ancient agro-pastoral techniques resulted in the forest taking over the calcareous grasslands, causing a significant loss of biodiversity. To remedy this, those managing calcareous grasslands have a choice between two options: either put sheep out to pasture, or, regularly cut and remove the scrub and the hay.

The southern part of the Tienne d’Aise natural reserve is a zone restored by deforestation in 2007 and 2009. Today the grassland benefits from the indispensable opening of this environment and no longer suffers from the shade of the pine woods planted here. With the exception of a few trees and juniper bushes, the calcareous grasslands cover practically the entirety of this site, and host many remarkable species. 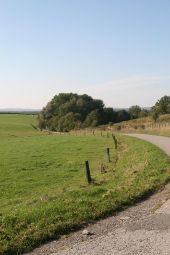 Tienne d'Aise can be discovered in the following trails...