The region of Houyet is abounding in game, such as deer, wild boar, foxes, partridges, etc. It is even said that this is one of the reasons that led King Léopold, the first king of the Belgians, to build the royal castle in Ciergnon. He was a fervent hunter, and it is said that it was in the woods of Custinne, on the spot thereafter known as the Tomb of the Wolf, that King Léopold I killed an enormous wolf reputed to be the last in the region. The residence is currently used by the ruling family.

The many deer in the region also had a role to play in the cutlery works of Houyet. The workshop produced knives with horn handles for hunting, etc., and once enjoyed great renown. What's more, it is thought that the workshop of the collective was built upon request of Léopold I around 1850-1851.
The knife handles were mostly made with bovid horns (from cows from local farms, but also from African water buffaloes), but when horn was scarce, for example during the two World Wars, they also used deer antlers and wood. 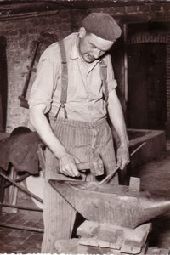 The Houyet cutlery works can be discovered in the following trails...