The river entirely disappears in the limestone subsoil at the “Gouffre de Belvaux” (Belvaux sinkhole) which is you can only admire during the visit to the Wildlife Reserve. The absorption capacity of the sinkhole is limited to 25m³/second. And yet, during periods of heavy rain or when the Ardennes snow melts, the Lesse river flow achieves a far higher rate and an overflow gathers upstream of the Gouffre de Belvaux which suddenly reaches the level of the old alluvial plain. The Lesse then flows back into its former river bed and floods the valley you have just discovered. Sometimes, this phenomenon takes place several times a year. The Ayets (nickname of the villagers of Han) then say that the Lesse “turns”…. 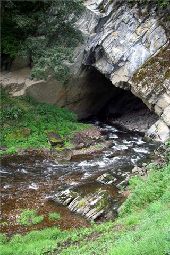 Belvaux Sinkhole can be discovered in the following trails...

Han-sur-Lesse - To discover nearby

Our tip : the Belvédère
ROCHEFORT

Our tip : the Belvédère
ROCHEFORT