The village of Ciergnon is not far now! The village is home to the royal castle which is assigned to the use of the current royal family. King Leopold I had this castle built on request of his wife, Queen Louise-Mary (the construction started in 1842), but it was Leopold II who was wont to stay there on a regular basis.
Before he died, Leopold II donated the domain to the State, so that it would be protected and preserved for posterity.
In 1874, Leopold II built the Royal Castle of Ardennes in Houyet in the magnificent park of the Domain of Ardennes. The castle became a hugely popular destination for the crowned heads of Europe and elsewhere. A park with water features was laid out and Leopold II managed to turn the domain into ‘the place to be’ for his rich Ostend clientele, who liked to organize their hunting parties there. The hotel was closed down at his death. The castle was pillaged during the First World War, and then turned into a hotel again from 1921 onwards. The hotel soon prospered and boasted 200 luxurious rooms, a golf course ‘golf du Château d’Ardenne’ (the Castle of Ardennes golf course). After being occupied by the Germans the second time round, the hotel, once again, closed its doors. On the afternoon of Friday 23 August 1968, a fire started in the castle, very nearly burning down everything in its path….. 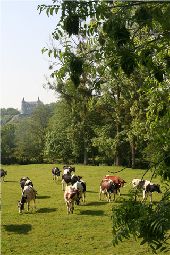 Ciergnon can be discovered in the following trails...