This takes you right opposite the château jaune (yellow castle) which belongs to the Royal Donation. This small castle was built in the 14th century by the first Lord of Villers. It towers above a superb 18th century royal farm with walls in half-timber work on your right. Brick has quite commonly replaced the cob that was made out of clay and hay. 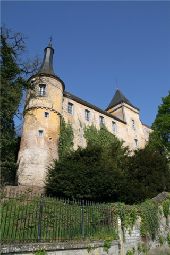 Yellow castle can be discovered in the following trails...