The former fortified castle, dating from the beginning of the 10th century, became a provostship and a military stronghold for the provost-marshal of Liège. It was at the centre of a fortified town surrounded by ramparts, dating from 1241 and had three gates: the gate of Lomprez (still visible), the “Porte du Levant”(Eastern or rising sun)  gate and the “Porte du Couchant” (Western or setting sun) gate. 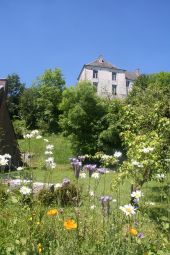 Revogne Castle can be discovered in the following trails...