On 18 August 1934 at a short distance from here, next to the former Hour-Havenne station, a historic event took place : the stratospheric ascension taking professor Piccard’s hot air balloon from Hour to Ljubjana in former Yugoslavia ( - 1.800 km or 1.119 miles which set the distance record at the time, the balloon flew at an altitude of 15.500m). Professor Piccard – who taught physics at Brussels University and was the also the first man ever to reach the stratosphere – wanted to measure cosmic rays as well as the variations in the ozone levels at different altitudes.
The field from which the balloon took off is completely level, but it is more than likely that the proximity of the royal castle in Ciergnon played an important part in the choice of Hour-Havenne: King Albert I had donated half a million of francs from his personal fortune to encourage Professor Piccard’s experiment.
The King had also launched an appeal for money in order to support the scientists’ efforts. In 1932, the « Piccard Balloon » series was issued, it contained three stamps. In total, more than 4.150.000 stamps were issued.
It is said that Hergé was inspired by Professeur Piccard to create the character of Professor Cuthbert Calculus! Star Trek creator, Gene Rodenberry, named Captain Jean-Luc Picard as homage to the scientist (and his twin brother, Jean Félix, also an eminent scientist). 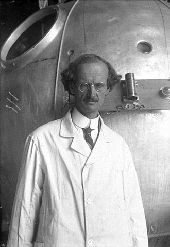 Stratospheric balloon flight can be discovered in the following trails...

Hour - To discover nearby

The Lesse
HOUYET
Close
My subscriptions