At the boundary between Boutonville and Gonrieux stands La Pierre qui Tourne (The Turning Stone), a monolith that may once have served as a receptacle for the blood of human or animal victims sacrificed to the gods of the people who once lived here. It could therefore be a sacrificial stone, a Gaulish cairn. A whole series of stories about ghosts, devilry, witches, etc. are attached to it People are afraid to pass by the monolith at night (some say it should especially be avoided on Christmas Eve). There is no precise legend about this stone in the village, just a few vague ideas about superstition, antiquity and mystery.

Some people believe the stone was used to polish and shape weapons, hence the name of turning stone. This stone lay flat on the ground for a long time, but was raised

a few years ago; its stands 3m10 tall and 1m30 wide. It weighs around 40,000 kilos. This stone still acts as a boundary between the two provinces of Hainaut

Not far from there is the spot known as Le Pendart, the site of the old pillory, where criminals were hanged. 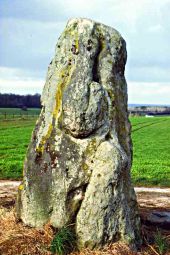 La pierre qui tourne (The Turning Stone) can be discovered in the following trails...

Church of Notre-Dame (Our L...
CHIMAY